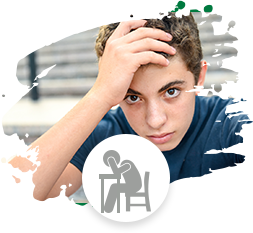 Mood Disorders are a category of mental illnesses that involve a significant change in mood. Although the average age of onset is 30, mood disorders can affect people of any age, including children and the elderly. Listed below are categories of the same mood disorders; however it is important to note mood disorders can have a variable clinical profile and diversity.  Symptoms listed below are general in nature are a guide to introduce and educate patients of various mood disorders but a full clinical evaluation and close follow up are needed frequently in child psychiatry to understand the nature of a mood disorder better.

Depression can describe a normal human emotion, but those with clinical depression have a cluster of symptoms that can last all day and can persist for at least two weeks and cause difficulty in everyday life.  Children can and do experience depression, though it may present differently than it can in adults.

Dysthymia is a mild, but chronic, form of depression that often lasts longer than two years. Biochemical, genetic, and environmental factors may all play a part in causing dysthymia.

Bipolar disorder is a mental disorder that causes major changes in a person’s mood, energy, thinking, and behavior. Those with bipolar disorder often have periods of mania (feeling very happy or "up") followed by periods of depression (feeling very sad or "down"). Children do commonly go through normal emotional ups and downs, but bipolar disorder is different. Symptoms are strong, and can make it difficult for children to do well in school and form relationships with family and friends. The causes of bipolar disorder are not clearly understood, but it appears to have a genetic component along with environmental and lifestyle factors that play a large role in the severity of symptoms. Sleep deprivation, substance abuse, and attempted self harm can significantly complicate the disorder.

Symptoms of mania include:

Symptoms of depression include: